In the Islamic tradition, this art was born with the need to transmit and preserve sacred texts. Over time and with the expansion of Islam from Spain to China, Arabic calligraphy developed in contact with different cultures. This has enabled the development of this art in all its glory through several styles and their particular aesthetics. The use of calligraphy was subsequently extended beyond the sacred texts to poetry, proverbs and words of wisdom.

Calligraphy developed from the angular and square Kufic style towards more cursive and round styles. Among these we find in particular muhaqqaq, rayhani, sulus, nesih and talik styles, which are still used today.

Like any traditional art, calligraphy is transmitted from master to disciple after a long education that lasts many years. Just like playing a musical instrument, daily and methodical practice is necessary to master the techniques of writing. The learning process also allows the disciple to exercise his human qualities (patience, perseverance, and humility): it often happens that the master asks the disciple to write and copy the same sentence for many months…

The instruments used for calligraphy are essentially: reed, ink and paper. The reed is harvested and aged according to certain standards, and then it is cut to the desired angle and dimension. The ink is made from the soot on oil lamps (traditionally collected from the lamps of mosques) mixed with gum Arabic and water. A ball of silk soaked with ink is then placed in the inkwell. Paper is prepared so that the reed slides over it and so that the ink does not impregnate the paper. It is thus coated with several layers of ahar (starch, egg white and alum stone) and then burnished with an agate stone.

Moreover, calligraphy has its rules and proportions: the length, the width and the diameter of letters are calculated according to a system of marks created with the tip of the pen (nuqta). The nuqta is the unit of reference for measurement which determines the size of all the letters and gives them an intrinsic coherence. Moreover, the combination of the letters responds to specific laws that give the calligraphic composition all its harmony.

For more information about calligraphy the following links may be consulted: 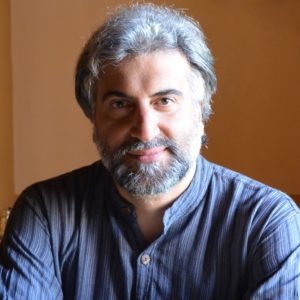 Bahman is an Iranian calligrapher and musician. Coming from a family of artists he received traditional training in both disciplines. He studied with the great calligraphy masters Amirkhani, Foradi and Kaboli, and with the great musicians Zarif, Lotfi and Zahed-Shirazi. He graduated from the faculty of Fine Arts in Teheran and the Ecole Beaux Arts of Valenciennes, and is now working on his doctoral thesis at the Sorbonne University on the theme of “The Musicality of Lines and Points”. He now lives in Paris where he divides his professional time between courses and workshops, conferences, exhibits of his work, and music concerts all over the world.

Of Spanish origin, Nuria shares her time between Ibiza and Istanbul. After a study trip of one year in Morocco in 1999, she developed her interest in Islamic art and specifically for calligraphy. She then studied with different masters of calligraphy in America and Turkey. In 2007 she obtained an ijazat (permit to teach) for calligraphy in sülüs and nesih styles, signed by her three main masters Hasan Celebi, Davut Bektas, and Mohamed Zakariya. Nuria is regularly invited to participate in international calligraphy exhibitions and leads workshops in Europe and the East.

In this respect, participants are strongly encouraged to contract their own travel cancellation insurance.

Bab Zouina cannot be held responsible of any damage or accident incurred by participants. Each participant will be in charge of all his insurance (travel, accident, liability, etc.) for the whole duration of the stay and for all activities.